After a lengthy break, the Valiants didn’t exactly impress on telly and then their trip to Morecambe was called off, so they’ll be keen to get back on track against a bang-in-form Derby team. 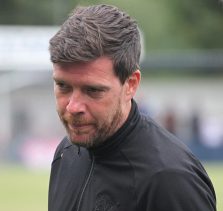 This is the hardest step. Make no bones about it now. We have done brilliantly so far as a club and a group, but this is the hardest jump because the gulf between some of the top teams in this division to, let’s say, the bottom ten or 12 teams in the division is massive, it has never been bigger, and the league gets stronger and stronger…
Port Vale manager Darrell Clarke
Darrell Clarke is an excellent manager in terms of managing people and he gets Port Vale working extremely hard. They are a newly promoted team but they’ve been touching the edge of the play-offs for quite a while now. I appreciate the fact we had a man sent off in the reverse fixture and lost 2-1, but it wasn’t an easy game. They are very organised, everyone knows their role. They are very aggressive from set-pieces it’s a difficult place to go to. It is a relatively local game so a good crowd will be in attendance from our point of view…
Derby County assistant head coach Richie Barker
It looks like Vale will have to go into this match with first-choice strikeforce James Wilson and Ellis Harrison on the sidelines. The front three of Butterworth, Odubeko and Massey didn’t impress against Peterborough so will Vale make changes upfront? Two options are to bring in Dennis Politic and Rory Holden.
Midfielder Tom Conlon is also a doubt for this game after he missed the Posh game. Ben Garrity and Tom Pett started in Conlon’s absence but summer signing Funso Ojo is pushing for a start as well.
Louie Sibley and Eiran Cashin are Derby County’s only injury doubts. The visitors will also be missing loanee goalkeeper Joseph Anang who has been recalled by his parent club West Ham. It shouldn’t make any difference to their starting line-up as 27 year-old Joe Wildsmith has been first choice in goal in recent games.
Vale’s form is looking distinctly patchy with three losses and two wins in their last five games.
Visitors Derby County are on a run of five straight wins in League and Cup.
49 year-old Paul Warne took over as Derby manager in September. He has had a good start to his Derby career with a 50% win ratio from his first 24 games in charge.
Previously in charge at Rotherham, Warne took the club to two promotions and also won the Football League Trophy.
Striker James Wilson could miss this game through injury but he retains a connection with both sides. Prior to joining Vale in the summer of 2021 he had a loan spell with Derby back in 2016 where he made four appearances without scoring. His Vale career stands at 64 games and 19 goals.
Recent transfers from Derby to Vale in recent years have mainly been loan moves. They include midfielder Callum Guy and goalkeeper Kelle Roos.
Other players to appear for both sides include striker Theo Robinson plus midfielders Robin van der Laan and Ian Taylor.
The two sides first met in 1921 when it finished in an honourable 1-1 draw. However, encounters over the years have generally been few and far between with just twenty competitive matches between the two sides.  The last League game at Vale Park ended as a 1-1 draw back in 1996 with Tony Naylor scoring for the Valiants.
The Valiants produced an upset on the road earlier this season when they won 2-1 thanks to goals from Ellis Harrison and Derby old boy James Wilson.
8 Port Vale wins
4 draws
9 Port Vale losses
We couldn’t not include this video could we! Here’s the full ninety minutes…
Derby County was founded in 1884 and was one of the twelve founder members of the Football League in 1888, Derby County is one of only 10 clubs to have competed in every season of the English Football League, with all but five of those being in the top two divisions. The club has won two championships and also an FA Cup.
Our traditional quiz…
Answers below (no cheating)…